This is the Moebius shawl Roisin knitted for the Magical Moebius Journey class that Myrt took. It took one ball of Nordyll’s sock yarn. 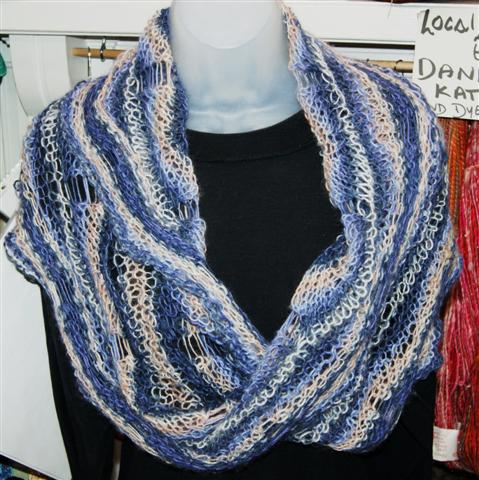 We had many of Roisin’s larger Magical Moebius shawls with us at Knit City. I was quite surprised to find that many people had no idea what a Moebius strip is, or who the man was whose surname now refers to various parts of Euclidian geometry. I learned about Moebius strips in my Grade 8 math class (thanks, Mr Mcguire!)

So, if you don’t know, a Moebius (or Möbius)  strip is a surface with only one side and one edge. You can make one by taking a strip of paper, giving it a half twist and fastening the ends with tape. To really see what’s happened, take a felt pen and run it along the surface, and then unfasten the tape. You will see you drew on both sides of the paper.

In knitting, a true Moebius object is unpieced, knit from the center out. Many people make a much easier, sort-of, Moebius by knitting a rectangle, twisting it, and piecing the edges.

Cat Bordhi is well-known for her true Moebius work. However, Roisin’s shawls, like the one below, are not based on a Cat Bordhi pattern. In fact, there is no written pattern. She has been working with the Australian designer and artist, Jude Skeers, whose pattern it is, and in whose head the pattern remains.  Maybe someday the pattern will be published! 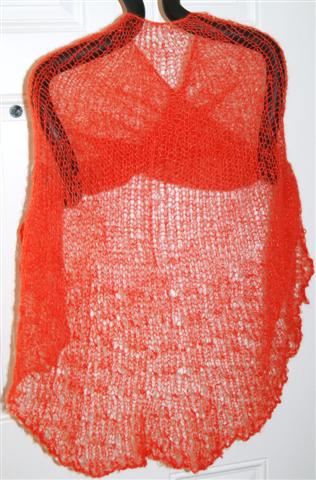