In case you’ve forgotten what the Knit City event that Roison and I went to, here’s a reminder. It was the “social knitworking” event (the organizers’ clever phrase), spearheaded by the enterprising young women who started Knit Social. In their words, “Our mandate is to help this community of crafters and artisans grown and become even more closely tight-knit.”
The weekend began on a very rainy Friday evening with a gathering at the venue, the Croatian Cultural Centre on Commercial Drive in Vancouver, which Roisin, her partner Phil, our friend Nigel, and I attended.  Here is Roisin, listening carefully, with Nigel, partially hidden at the end of the row in front of her. 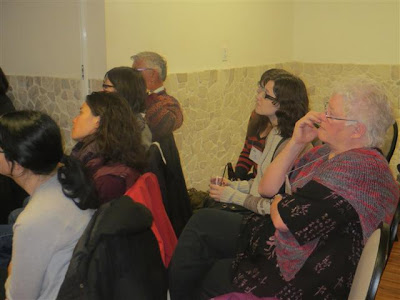 Here’s a photo of only a small part of the capacity audience. The first speaker (on the right in the photo) was Emily Werker, a former editor of Interweave Crochet magazine, who spoke about…crocheting.  The joys of it, some history, and lots of information (I didn’t know crocheting takes a lot more yarn per item than a knitted one, for example). She is lively speaker, and there were lots of questions from the audience (many of whom were knitting–and probably crocheting, although I didn’t see any) 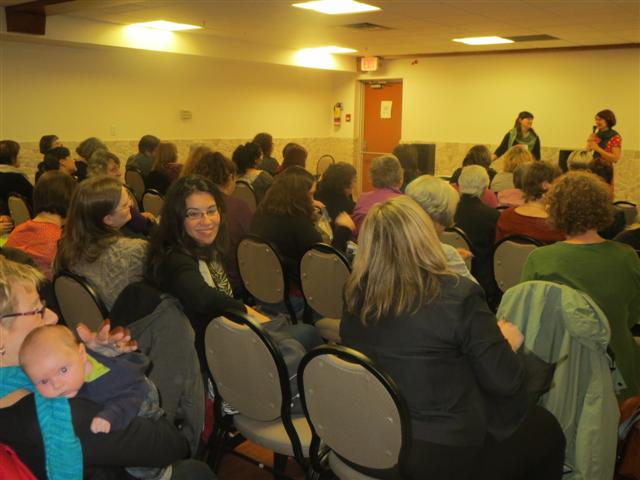 The second speaker was Sylvia Olsen, author, story-teller and knitter, perhaps best known right now for her wonderful book, Working with Wool: A Coast Salish Legacy and the Cowichan Sweater. 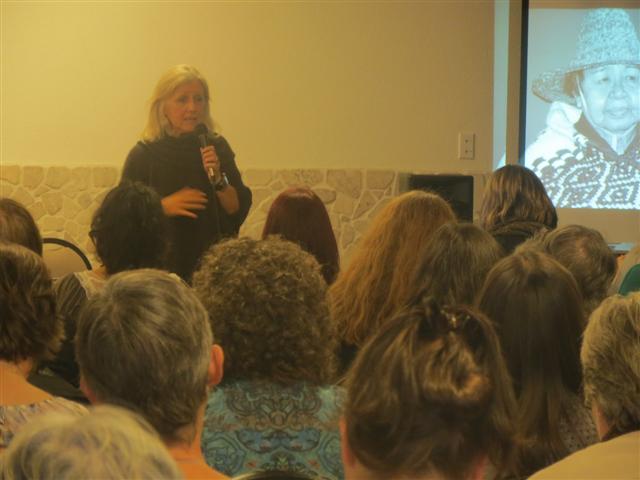 Her talk was very interesting…and Roisin and I tucked away a terrific idea Sylvia mentioned: felting old sweaters and turning them into purses (or whatever!).

Our random observations: what a LOT of young people were attending. Mostly women, but some men. Way more young people than older types such as ourselves. This is heartening! And stereotype-busting too. Look at this young woman’s shoes…. (I love them, not that I could have worn such high heels even when I was her age). 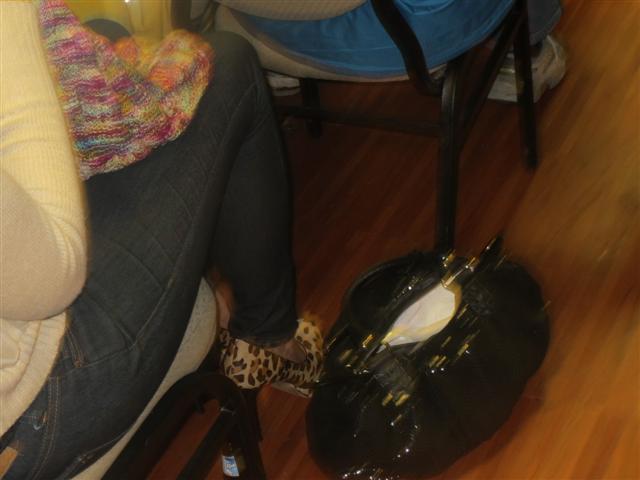 Almost everyone was not only knitting, but was wearing something knitted or crocheted or woven. Like this woman. And that was the first event of the first year of Knit City…an event we are already looking forward to in 2013!
Next post: day 2.