Whew! Lots to catch up on! So, let’s get going…this post covers Day 2 & 3 of the fabulous Knit City event. I’ll do one more post highlighting some of the vendors tomorrow but before that I will catch up on posting photos of your projects.

Day 2 started–for the attendees–at the civilized hour of 10am, with the Marketplace opening at 11am. Long before 11am, the lobby was full of people in line, waiting to get in. 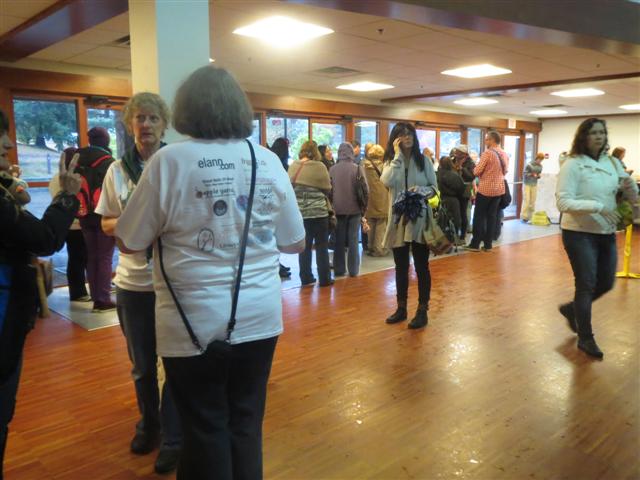 I took this slightly fuzzy photo (it’s me, not my camera) just after the doors opened and the first 50 people were happily waiting to get their swag bags which included a skein of yarn specially dyed for the event, in the colours of the logo. You can see the tree of yarn in the next photo. 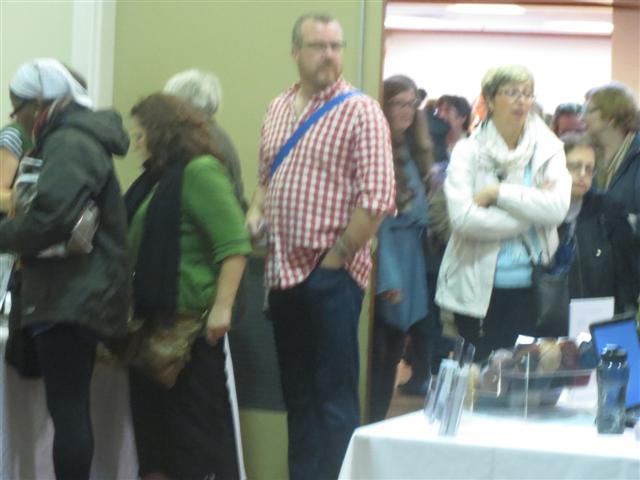 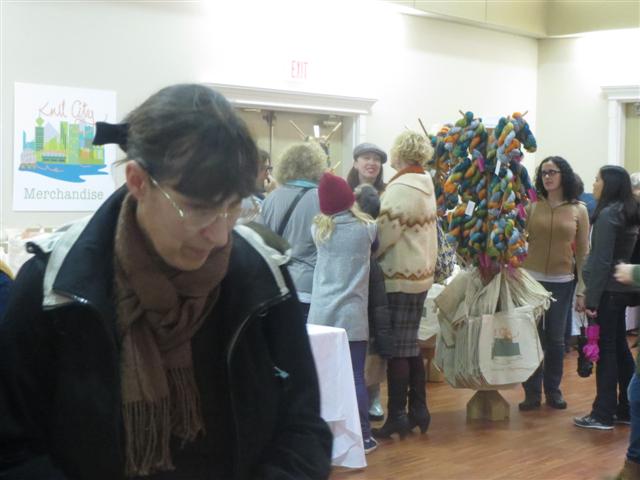 The hall was FULL of happy people, looking, chatting, and buying yarns and yarn-related items–patterns, needles, buttons, some things already knitted. Roisin sold one of her amazing Magical Moebius shawls to a woman who wanted something light and stylish to wear in India. The buyer wasn’t sure she was keen of the slight sparkles in the yarn but Roisin wisely pointed out that everything is sparkly in India! 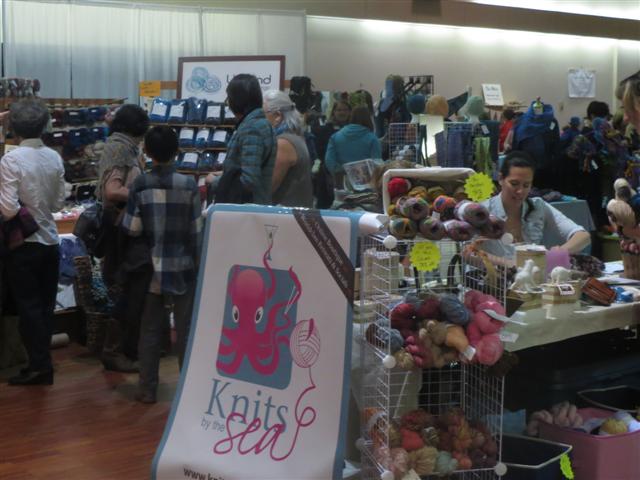 Here we are at the Great Balls of Wool table on Saturday…Roisin is behind the camera. Left to right that’s Nigel, me and Phil. Nigel knitted the sweater he’s wearing. I am wearing a Magical Moebius shawl by Roisin, made in a bamboo yarn that got a lot of attention when I was walking around the hall. I had to immediately admit I was not the knitter. Phil is wearing a Cowichan style vest by Roisin. 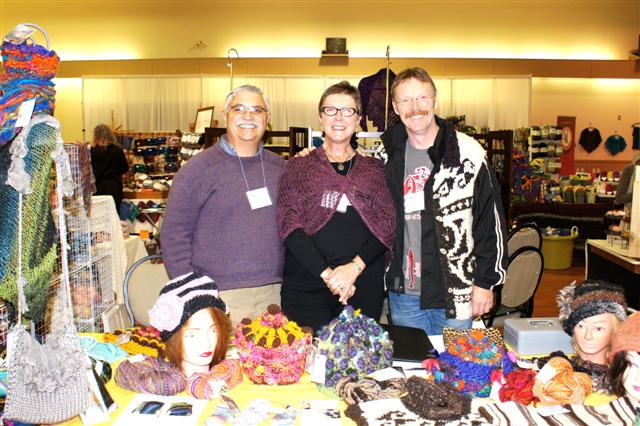 Overheard in the washroom: a very small girl said to her mum, “Mummy, everyone is wearing something knitted!” Not only that, people were knitting everywhere… 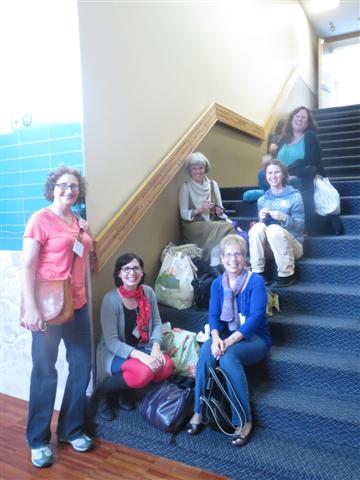 Here is Nigel, staffing our table on Sunday, wearing his “Camino” vest, and working on the heel of a sock pattern he is submitting to Skacel. 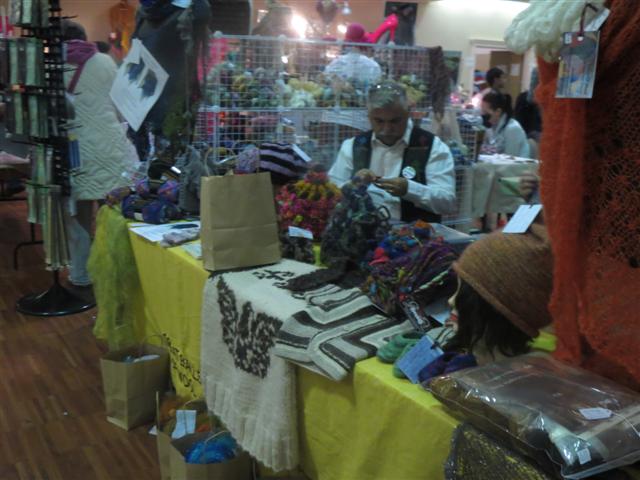 Sunday was a bit quieter than Saturday, when at least 750 people had passed through the hall. But there were plenty of people on Sunday too. Over the two days, I’d guess almost 1000 people attended which is pretty amazing for the first year of an event.

Phil and Roisin’s grandson James dropped by to say hello… 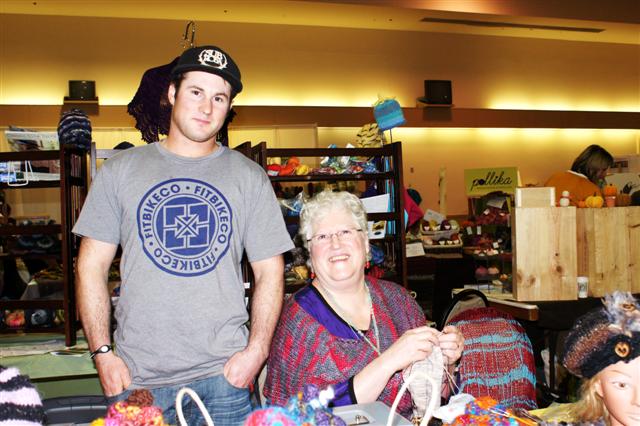 And Phil went off in the rain to watch grandson Devin’s football game…he’s number 88. AND he knits! 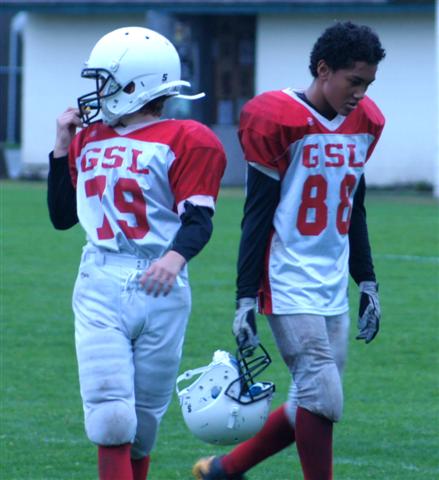