Customer Carol brought the pamphlet pictured below in, Traditional Nova Scotian Double-Knitting Patterns .  It’s wonderful. These are original designs gathered in 1972 in Nova Scotia.  Roisin’s favourite is “Mrs. Hearn’s wallpaper” pattern. Come in and have a look!

The librarian in me had to know more…the pamphlet pictured here was published in 1972, the first edition. It has been re-issued once, as far as I can tell, in 1985, with a fancier cover….that’s the one you will find at Amazon and Indigo. 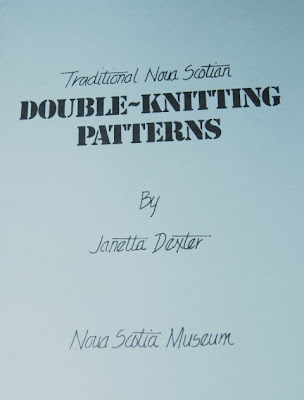 And double-knitting here does not mean the weight of the yarn. It refers to using two strands of different coloured yarn at the same time. Here’s an excerpt from an interesting document on the “Historical Crafts” of Nova Scotia, issued for 4-H leaders, in Nova Scotia.

Knitting was a daily craft done by settlers throughout Nova Scotia.  Every member of the family needed a supply of mitts, socks, sweaters and underwear to keep warm during the cold Nova Scotia winters.  The odd bits of yarn were used to make blankets and floor coverings.  In winter, men wore breeches which they often knit themselves of raw wool.  These items were prized and often handed down as a family heirloom.  Knitted leggings were worn by infants and young children.  Women and girls wore knee-high socks.  The socks were made of silk or cotton for summer and fine wool for winter.  The fancy patterns were hidden by long skirts.  Mitts were often double knit or ‘Fair Isle’ pattern.  In some areas of Nova Scotia, the term double knit was referred to using two strands of wool at the same time.

The full document is here:
http://www.gov.ns.ca/agri/4h/manuals/heritage/crafts.pdf