Words, lots of words coming up in the next few months. Jude Skeers, our guest at GBOW for a series of classes and workshops in late October 2015, has sent Roisin articles he wrote to share with you (so the “I” in the articles is Jude himself).
This article was first published in the Australian magazine Yarn which GBOW gets. Roisin says it’s interesting so ask to have a look.
There are lots of videos of provisional cast ons….however, I think you’ll see that Jude is doing this useful technique a bit differently.
Invisible (Provisional) Cast-On
Casting On – which Richard Rutt, in A History of Hand Knitting (1987 p.13), refers to thus: ‘The creation of the first course of loops, the foundation of a piece of knitted fabric, is the initial problem in knitting.’
Mary Thomas, in her book, Mary Thomas’s Knitting Book, first published in 1938, made reference to six methods of casting-on. Method 5 is Casting-On (Invisible), p.66.
According to Mary Thomas: ‘The object of this method is rather different from that of any other, since it is to avoid and not create a definite selvedge edge. This is accomplished by “laying” the yarn round the needles and a foundation yarn, which can be part of the ball end, or of an independent nature.’
She goes on the write: ‘This is a valuable method of laying foundation stitches, as it leaves the selvedge free for any purpose. If the foundation yarn or cord is removed, a row of loops is exposed, which can be picked up and knitted in the opposite direction.’
It was in the mid-eighties that I first used this method of cast-on. I designed a framed knitted wall piece that was made of 3 squares with circles inside them. They were knitted from the outside to the centre. I invisibly cast on 400 stitches for each square using a circular needle and waste yarn. I found this method of cast-on incredibly difficult. But the completed squares were grafted together to form a rectangle and I then picked up the 800 invisible stitches to knit the edging.
Returning to using this method of cast-on, I worked at solving my problem of casting on using waste yarn. I found that the waste yarn was not substantial enough to hold the stitches straight. To solve my problem, I now cast on using monofilament to replace the waste yarn. I have tried 1.5mm, 2mm and 2.5mm monofilament and find the 2mm cord to be most successful. It is large enough to hold the shape of the stitches and yet not so thick as to make the loop of the stitches oversized.
Where to find monofilament? It is the cord in circular needles. Knitters who have interchangeable needle kits with extra cords can try them. But the simple place to find 1.5mm,  2mm and 2.5mm monofilament cord is at the hardware shop or in the garden shed. The monofilament that I use is ‘line trimmer’ cord – the cord that is used in lawn edge cutters.
Invisible cast-on is easy to learn. Elizabeth Zimmermann writes in Knitting Around (1989, p.183): ‘Once mastered, you will find countless uses for this technique. In reality you are simply winding the working wool around the needle, separating the loops with a strand of spare wool.’ And thanks to the internet, there are many videos demonstrating how it is done.
Below is the basic method that is to be found in knitting books that include how-to details. It may be named Invisible, or Provisional, cast-on. You are making a provision to knit the stitches in the other direction.
1)    Place stoppers on both ends of length of monofilament to prevent the stitches from slipping off the end. A piece of cork or elastic band will suffice.
2)    Tie the knitting yarn onto one end the monofilament.
3)    Hold the monofilament and knitting needle in your right hand.
4)    Wind the yarn around the needle and the monofilament and back over the needle.
5)    Continue until you have the required number of stitches. 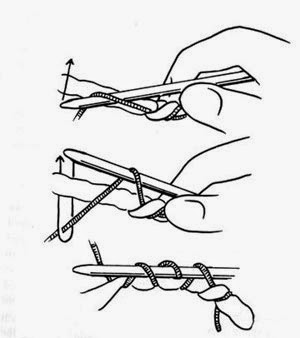