Here is the fifth “Tech Talk” from Jude Skeers, our esteemed guest in October 2015. As noted in the first Tech Talk article (posted January 15) he has sent these articles to Roisin to be shared with us.
The article was first published in the Australian magazine Yarn which you can see at the store.
It seems fitting to post this on a day when Roisin posted a photo of an amazing 2 dimensional medallion on Facebook, part of the Men@Work exhibition in Australia.

Medallion Knitting has been part of the knitting genre for many centuries. It includes flat knitting as diverse as doilies, table clothes and counterpanes. Mary Thomas’ Book of Knitting Patterns  (1943), divides medallion knitting into three sections and calls them Medallions in round knitting, Medallions in flat knitting and Circular medallion in sections. Mary Thomas wrote, “Medallion knitting enjoyed a tremendous vogue in the 18th and 19thcenturies, when cotton-knitting was at its best, with bonnets the fashion for everyone, and knitted bedspreads the treasured heirlooms of every family”. Rae Compton in The Illustrated Dictionary of Knitting (1988) supports Thomas, “At its height medallion knitting was responsible for many hand-knitted heirlooms – the small, often lacy patterns joined into bedspreads. But medallions were used on their own for many other items, such as endless variations for bonnet back section, lace mats, doileys, table mats and traycloths.” It is interesting that medallion knitting could be  used to make a ‘fabric’ then to fabricate something else.
Medallions in round knitting form flat circles and symmetrical polygons. They are knitted by using the technique of increasing from the centre or decreasing from the outer edge. 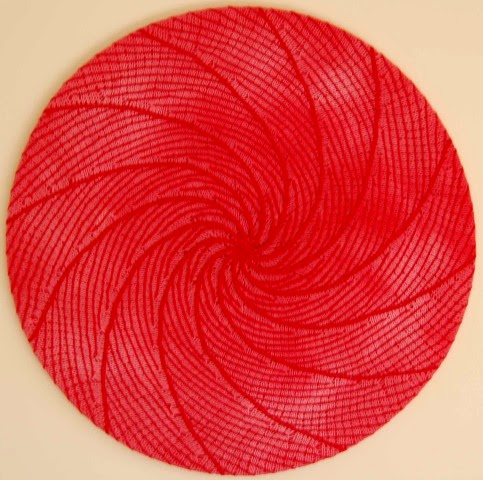 Knitted from the outside to the centre.

The feature of this knitting is a mathematical calculation that is required to construct a fabric that by nature is three dimensional into a two dimensional surface. “There are two methods of knitting them in rounds.

The more usual method is to knit from the centre, gradually increasing until you reach the right size. The second method is to begin with a fixed outer measurement, then decrease as you knit until you finish at the centre.” Pam Dawson, The Encyclopedia of Knitting (1984). If increases or decreases are not in a perfect ratio to the radius either puckering (caused by too many stitches), or cupping (too few stitches) will result. A formula for knitting lace, stocking or garter stitch with a single yarn may not work for multicoloured or cable knitting. Tension, yarn fibre and ply and needle gauge need to be taken into consideration, in addition to the characteristics of the stitch pattern being used.

Patterns knitted from the centre predominate. Research has revealed a single decrease pattern. “Acanthus Leaf”, from Weldon’s Practical Knitter, Nineteenth Series, reproduced in Mary Walker Phillips’ Knitting Counterpanes (1989). The Weldon’s publications and other 19thcentury publications are a good source for medallion patterns, though they are not cross-referenced as medallions.


Medallions in flat knitting is the process by which separate geometrical shapes are knitted and then combined to create a larger piece.  Mary Walker Phillips’s in Knitting Counterpanes has wonderful examples of this type of medallion knitting, some dating back to the early 19th Century. Her patterns combine a variety of geometric shapes to form bedspreads. Medallions in flat knitting are usually knitted on two needles. Mary Thomas writes “This work is small and easily carried about, so squares can be made in odd moments and big articles created.” She also subtitles her section on medallions in flat knitting with the text “also known as Gossip Knitting and Community Knitting”. This is no doubt a reference to the social activity when several knitters created the medallions to be joined into a single large item such as a counterpane.

Knitter’s Handbook (2001 – first published in 1986) by Montse Stanley writes, “Medallions, individual geometric shapes. Many small ones can be sewn together into large patchwork projects.” She details triangle, square, diamond, and other polygonal shapes.

Circular Medallions in sections is the third type of medallion detailed by Mary Thomas. “A circle, is made on two knitting-pins achieved by ‘Turning’.” Short row shaping is the least common technique to knit medallions. How to improve your Knitting technique (1984), edited by Pam Dawson has a pattern for circular medallions. “This technique, worked on 2 needles, form wedge-shaped sections by means of turning at a given point in a row and leaving some stitches unworked……When sections are worked in this way, a seam is required to join the last section to the first section.”

These both describe what is now commonly known as short row shaping, it is the least common technique to knit medallions.
Multiple variations of medallion knitting patterns have been passed down, in most, if not all knitting cultures and traditions. Medallion patterns can be found in the earliest published patterns, with lace patterns dominating. These patterns were written to be knitted from the centre out, which makes sense when lace knitting, as ‘yarn over’ and ‘yarn forward’, naturally lend themselves to lace.

Compton, The Illustrated Dictionary of Knitting(1988), has published twelve patterns for a variety of medallion shapes including, windmill, target, hexagonal and swirl centre. She recommends knitting from the centre out as she writes: “The benefit of working from the centre out, even for a square, is to be found, not only in the growth of the pattern which repeats in each quarter, but in the fact that the edge can be patterned and fluted or shaped and cast off with a loop or picot edge, so completing the lace effect.”

A quick search of Ravelry supports Rae Compton’s  further comment that “medallion knitting is no longer in fashion as it was in the eighteenth and nineteenth centuries.” Ravelry has only a small number of medallion patterns. Research for this article has only thrown up two coloured quite large medallion patterns, knitted from the centre to the outside, Chinese Fish and Kaleidoscope from Knitting for the Home (1991), by Liz Gemmell.

Norah Gaughan, Knitting Nature (2006), has hexagonal and pentagonal medallions within garments and wraps. Claire Crompton, The Knitter’s Bible, Knitted Afghans and Pillows (2008), has medallion patterns for rugs, cushions, and a knitted square.  Knit Noro (2012), has a pattern for a Modular Afghan, which is 61 small hexagonal medallions knitted from the outside to the centre. Who does medallion knitting? You do, but you were never told what it was.