This Tech Talk is a fascinating view on the evolution of Jude Skeers’ knitted circles.
“How to knit a flat circle?” was the assignment that I set myself in the late 1970’s. For the next thirty years this undertaking and its resolution that dominated my art knitting.  Medallion knitting was the title of Tech Talk in ‘Yarn #27’, it investigated the background and process of this knitting technique. This tech talk looks at my adventures and misadventures with Medallion knitting.
The first framed wall hangings that I knitted, when I set out to turn my skills in garment knitting into creating knitted art pieces, were squares, octagons and dodecagons. Framing these cornered pieces proved to be very unstable process as multi sided frames were only as strong as their weakest joint. It was the collapse of these frames that lead me to endeavour to knit a circle. Knitting, framed in a circle had to be more stable. I calculated that I needed to start at the circumference and decrease at the rate of four stitches a round, then decreasing  faster as the centre of the circle approached. After much trial and error, the formula was mastered. All my early medallions were knitted in this technique from the outside to the centre. My knitting of lace medallions pieces from the centre to the outside didn’t happen until the mid 1980’s. Many years after mastering flat circle knitting I read the chapter on Medallion Knitting in Mary Thomas’s Book of Knitting Patterns which sets out a similar mathematical formula to the one I use. 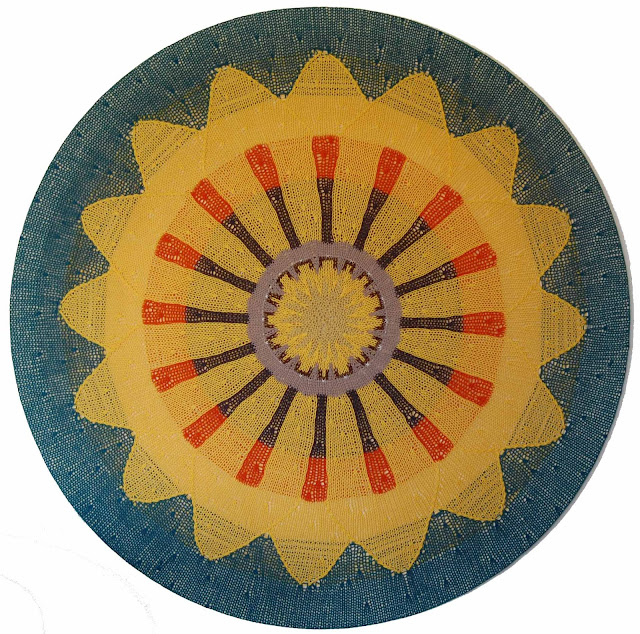 During the first six years of Medallion knitting I created a wide range of different sized circular art pieces from 60 to 180 centimetres in diameter. Each piece was stretched around a 2.5 centimetre thick circular hoop. I played with using jacquard and cable techniques, separately or together. The works included geometrical shapes, floral images and all white pieces with cabled tree motifs.
In 1982, I completed my most adventurous work circular medallion work – three pieces each 180 centimetres in diameter. Based on an image of the Western Australian Scarlet Banksia, they represented three stages in the life cycle of the flower. This work involved the intertwining of jacquard and coloured cabling techniques including reverse cabling. The work was commissioned for a church in Melbourne.
In the process of knitting a surface cabled piece I created The Echidna. 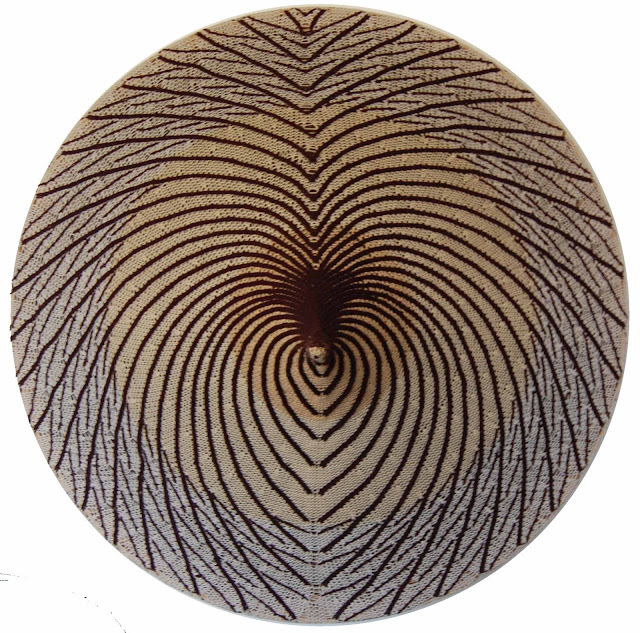 I made numerous attempts at getting the cables to flatten. My original formula for flat circles just didn’t work. Regardless of how many times I unpicked and reknitted the centre I could not get it to flatten. Finally, as you may recognise in the picture, I placed a broom handle needle in the centre of the framed piece and gave The Echidna a nose. From this failed exercise came my sculptural installation knitting. Ten free standing trees and mushrooms were created over the period from 1984 to 1986. The largest trees were 3 metres high with a span at the top of 180 centimetres.
Reverse cabling in my medallion knitting wasn’t perfected until the late 1980’s with the four pieces that formed the Sunset series. One of this series is pictured. With this technique it was necessary to carry three coloured yarn as the rounds were knitted. By cabling one of the yarns behind the others it was possible to create a different colour sky and horizon. 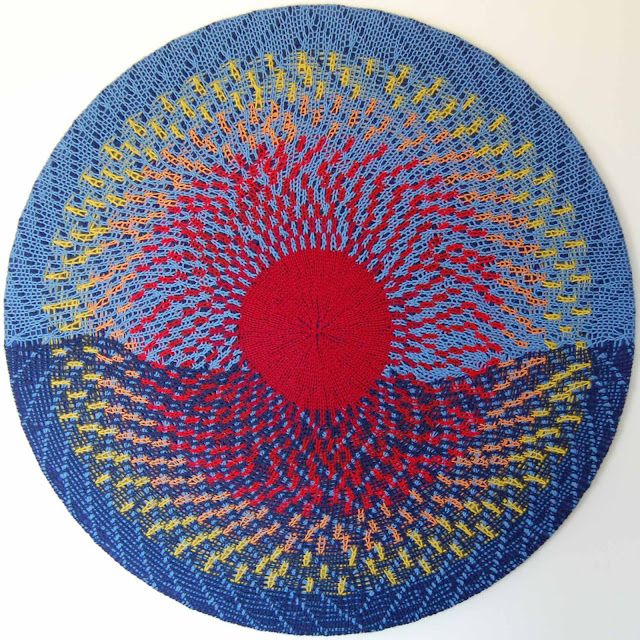 The most delicate creation of my medallion knitting came in 1986 when my first web was knitted. It is a sixteen or eight sided medallion, which although knitted with over 100 stitches are displayed with only 16 stitches. The other stitches are dropped to create the spaces. Web medallion knitting forms the structure of my environmental installation art works, ranging in size from 25cm to 5 metres in diameter and using materials as diverse as lurex sewing thread to 1 cm diameter rope.
The Black and White patterned piece pictured is my most recent medallion. It perfectly exemplifies a circular medallion knitted by decreasing, even down to the segmentation and the octagon and square at its centre. In the early part of the 1990’s I put a square and a circle together in one medallion. I knitted 15 rounds of a normal medallion square using mitre corners, then changed the decreases process to knit a circle in the centre. In the last three years I have returned to this technique to knit a cabled tree in a circle within a square. I plan to expand on this to move into what I am calling my heirloom period, calculating that it will take 20 squares to create a single panel. At that rate I will need to knit 80 squares to knit counterpanes for my grand children. Thirty years and counting I am still loving knitting medallions. 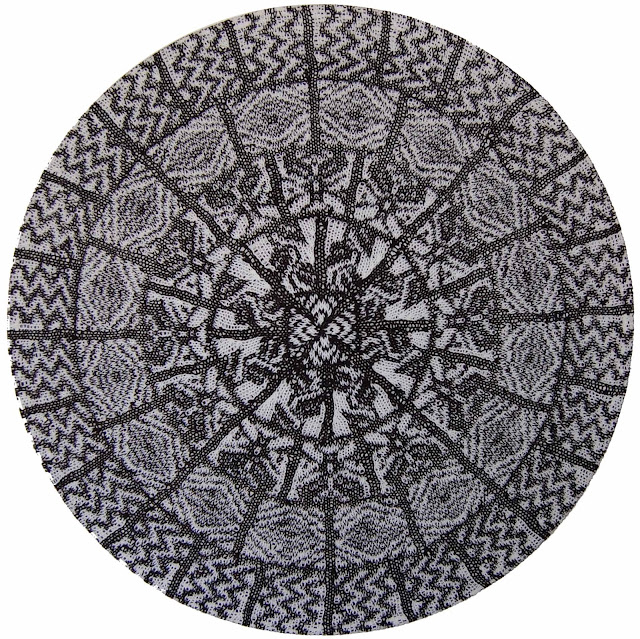